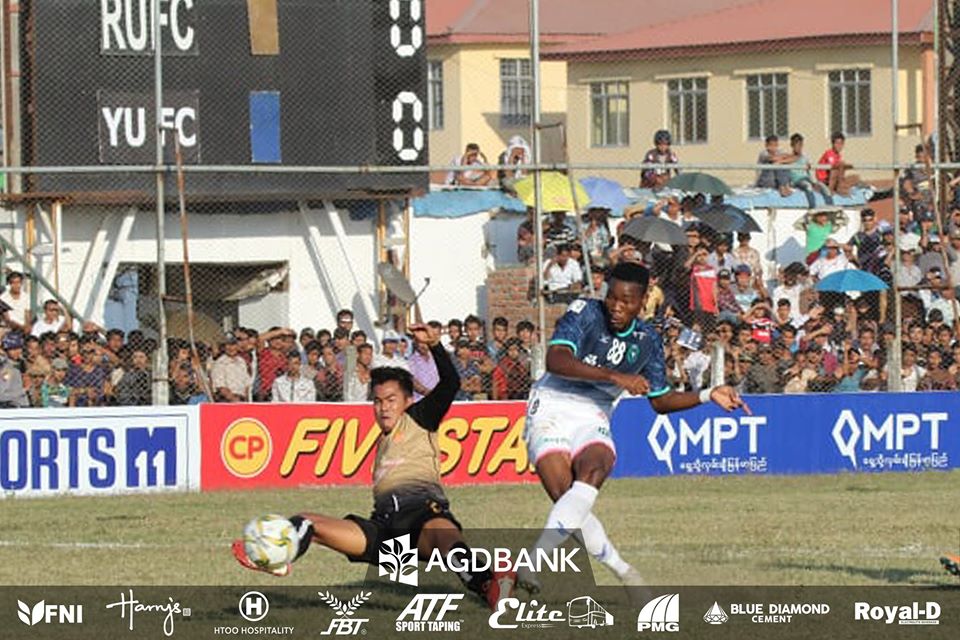 A goal of Emmanuel brought three points after beating Rakhine United in the week-8 of MPT Myanmar National League 2020.

The head coach changed the squad with Sann Sat Naing (GK) and Htoo Khant Lwin in the defense, and Barfo appeared as the lone striker.

The match was sound good to watch for the fans as both teams rival hard to take their advantage. Aung Kyaw Naing and Barfo sought for the goal while a cross of Mg Mg Lwin could hunt the host. Meanwhile, the host tried to pass through the defense to take a lead. However, the lads could handle their attacking. Both teams could not break the deadlock at the interval.

In 51 minutes of the second half, Yangon got a free-kick which was hit by Mg Mg Lwin to Aboubacar who closely attempted to head to the net. Then the coach changed the squad with Soe Min Naing, Nyein Chan Aung, and Emmanuel in the place of Zin Min Tun, Aung Kyaw Naing, and Barfo. In 80 minutes, Emmanuel opened a leading goal for Yangon with the assist of Shori. After allowing a goal, the host fired to equalize. But Yangon defense and goalkeeper held it down not to concede a goal. At the final whistle, Yangon United earned a win over Rakhine United with 1-0.

Yangon United Head Coach U Tin Maung Tun said, “Everyone worked hard for the victory. The weather was not good to play as well as the pitch. However, I want to congratulate all the players on the win”.