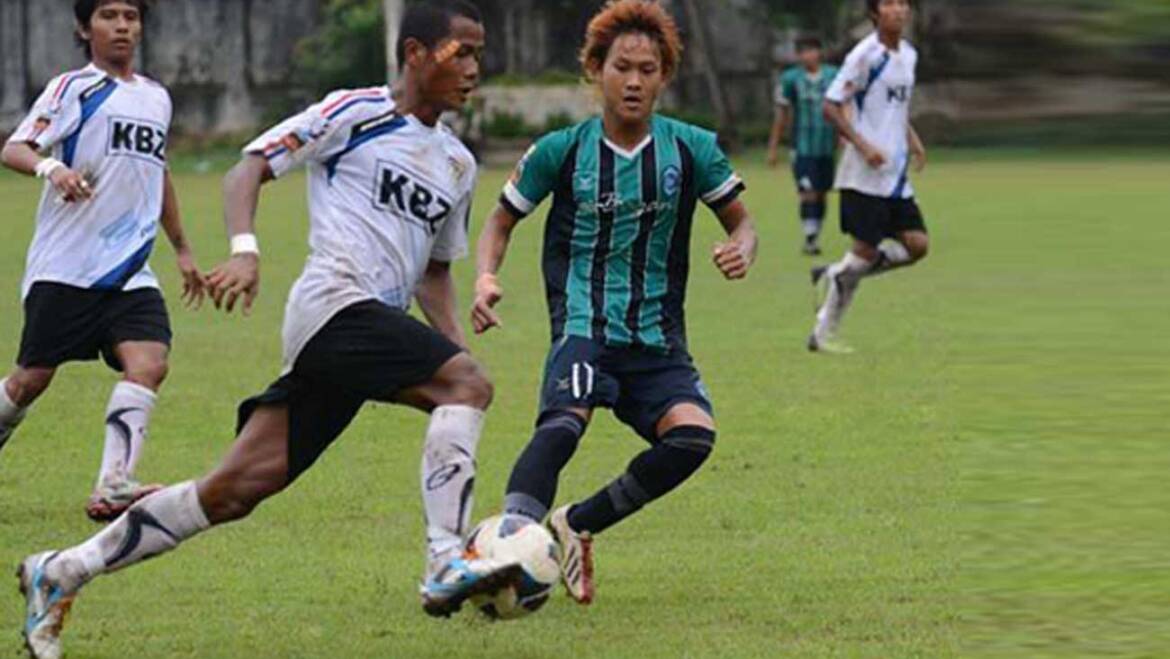 As a game of 2013 the Myanmar National League Cup competition, the Yangon United team and Rakhine United were matching and both sides could not score any goal, till over 50th minute of second half. This match was sheer played by the local footballers, as some players, who were selected for coming soon 2013 Sea Games, were not allowed to enjoy this match and the foreign players were excluded by the regulation.

It was senior player Yazar Win Thein, who stood at the corner spot and then, he kicked the ball so precisely into the goal area, where the Yangon players and opponent defenders were placing intricately. The ball soared so high that the tall defenders like Aung Theik and Myo Min Htut could not head, but the youth striker Kaung Sett Naing jumped so high and headed to score. It was the sole winner for the Yangon team for this game. Beside this, it was also Kaung Sett Naing who equalized in the game with the Chin United.

In the next game, the Yangon United was defeated by the Yatanbon team but same points, so, the Yangon team could enjoy play-off stage by goal score. At this stage, the Yangon team played with Hantharwaddy United and they kept 1-1 goal draw till 90th minute but lost the opponent team with 3-1 goal in injuries time. For the Yangon team, it is failure as they could not reach the final but the advantage was that decision maker could see obviously the ability of local players especially the youth players. So to say, witnessing the senior level ability of youth striker Kaung Satt Naing was worth profit for the club.

The youth striker Kaung Sett Naing then, was participated in both of the two games, 2013 Myanmar National League youth competition and 213 Myanmar National League play-off match. In the afternoon, he played in the Youth competition and he left the Yangon for the Mandalay by car at night and on the next day, he played for senior team and that was amazingly unbelievable.

Who Is Kaung Sett Naing…?

A little kid, who will be famous in future because of his football skill, was called Zwe, a nick name in his childhood days. Namely after by his parents as his perseverance is so tremendous. Kaung Sett Naing was born on March 21, 1994 and his parents are U Zaw Naing and Daw Khin Thawe Thwe Win. He his three siblings and he has two sisters.

In 1990s, Kaung Sett Naing’s father U Zaw Naing was not only famous player in the atmosphere of Myanmar Selection Football but also he is one of the most outstanding wing players at the Transportation Ministry’s football team. And his mother Daw Khin Thawe Thawe Win was familiar to athletic in her youth days. U Zaw Naing, who is not only his father but also the coach of Yangon United Youth team, is foremost coach of Kaung Sett Naing. Kaung Sett Naing’s famous Uncle is U Myo Hlaing Win, ex-Myanmar Selection player and currently U Myo Hlaing Win is coach of the Nay Pyi Taw team.

As most of his ancestors were footballers and his community is sport atmosphere, eventually, he had spent most of his childhood days, in the football pitch and footballer champ. Even though, his childhood dream is to be a striker, he used to wear a set of goal keeper glove all the time, except in sleeping time. Kaung Sett Naing played the Eastern District student football competition, yet he was 6th standard. And then, he represented as a Myanmar Selection player at the age of 14. Eventually, he passed the matriculation examination and became U-16 Myanmar Selection player.

To the Yangon United…

In selecting players for the Academy, Mr. Eric William who is very patient coach for the development of youth player, local coaches U Myo Hlaing Win, U Tin Maung Htun, U Aye Naing, U Zaw Naing, U Maung Maung Gyi, U Htun Tin Aung made so much careful decisions. After that, Eric William transferred to the Yangon senior team and the new coach for the Academy was Andre. Mr. Andre became chief coach of the famous Thai Club BEC, Telrosatna team later.

And then, Kaung Sett Naing could show off his ability and skill at the Yangon Academy team and he became one of the famous players of Yangon team. His scoring power was interested by the opponent senior teams and he also got offering from them. At the same time, he became one of the key players of the Myanmar Selection U-19 team and one of the favorite players of the Germany coach Gutt Frideric. In 2013, he was regarded as the third best youth player. The then, first best player was Nay Pyi Taw team’s wing player Aung Kyaw Naing, the second best player was Ma Gwe team’s defender Nada Kyaw.

However, there were a lot of highly qualified strikers at the Yangon senior team. So, the youth striker Kaung Sett Naing was sent on loan to Ma Gwe team for getting experience, in 2014 football season.